My friends Jan & Neil have sent me the following feedback..

“Sometimes the game is too long and the longer you play the harder it is for anyone to win….”

There are a couple of strategies, within the rules, that help:

1.     Instead of a pick-up from the undealt pile, you can pick up all the cards (including gods or Pandoras) – down to a predator – from the discard pile.  You must put down a god instead.  Make sure people always put down the predator/s first, then their prey etc on top

2.         When you make one row with the same numbers  – if the game is getting difficult to win – you could use a god of that realm, instead of a number card.

But, there is a suggestion, from my friends, that Pandora could have another use.

In Greek legend Pandora, as the first woman, was Gaia in human form.  Both are red nature ‘tooth & claw’.  Like Gaia, Pandora was the giver of gifts, both the good and the bad, both those we want and those we really hate.  What we think of the gift, is not their problem!

Maybe the Pandora card could be used, not only to pass on a predator, but could also be used to raid a bird card from someone else?

Do you like this idea? Do you think it would it make a difference in lengthy games? 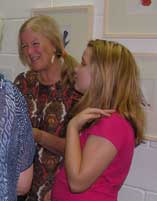 We had a fabulous evening with friends at the Mahara Gallery.  Launched the game.  Opened Morgan’s exhibition of illustrations for the game (he did 75!). And Sasana played (Morgan is the centre musician).

Welcome to Kakariki Games! We’re new on the block. While you’re browsing, please check out our new game Cloak of Protection, about New Zealand birds & their predators. We’re very proud of it.

What do you think everyone?