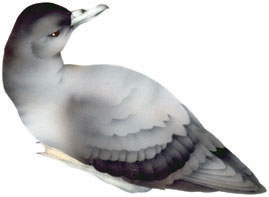 at that least that’s what Nicola Toki has put us under, in her blog this week on STUFF (Dominion Post on-line). Titled In Our Nature.

Here’s what she said about the game:
“The maker of Cloak of Protection kindly sent me one of the games, which the bloke and I played last night. The bloke was tired and is notoriously cranky about card games in general, but he got quite into this one, beating me (annoying!) and it didn’t take us long to work out that if you landed a “predator” card it was night-night to half of your collection.

“This game is entertaining, educational (the impacts of predators on our native species becomes very obvious very quickly) and the cards are beautifully illustrated. I’d definitely recommend it for families that are interested in our native wildlife. It’d be great for camping or at the bach over summer.”

She knows her stuff, having written a couple of books herself.

The first, Invaders – animals from elsewhere that are causing trouble here – was selected as a finalist in the 2010 LIANZA Children’s Book awards for best non-fiction. It’s basically about all the baddies that we’ve brought over here (including sneaky stowaways, out of control pest control, and pet escape artists), and the impact they’re having on our precious native wildlife.

The second book Wild Buddies – friendships and unusual relationships in nature – is about all the different wildlife that relies on other species to boost their survival. Like, for example, the tuatara that take over the burrows of seabirds, eventually becoming flatmates from hell, muscling into their space, eating their eggs and chicks and generally being a pain. Or the worm that takes over the mind of a weta!!

Up the Waikanae river today, I saw a mallard swimming with 2 chicks close in behind. They’re really common around here – in the ponds, on the lagoons, & up the river.

Why do mallards do so well here? They were hard enough to establish! It took a huge amount of time and effort. First try was in 1867 with British ducks. Further tries were in the 1930s & 1940s when many more birds (including American stock) were released.

There are three main reasons. She lays many eggs in the nest (my friend saw a bird with 24 chicks the other week!). She can lay several times a year. And they are good parents.

Both parents watch over their nestlings carefully. She leads the ducklings to water soon after they hatch, carefully watching over them, as they swim along.

Meanwhile, Cloak of Protection is at the Hutt City hui, next week 6 Nov. I’m really looking forward to playing the game with students from many schools in the region. You will see a lot more enviroschools loaded next week, and can watch their journey from here. Slowly the cloak spreads! 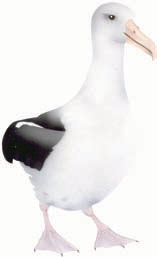 Once Maui, the wind-controller, had every wind, except for one.  So he shut the others in a cave, to keep them from blowing, and went searching.  His plan was to imprison them all together, and to block up the entrance with stones.

But he never, ever, caught the wild west wind.

Yet it is on this wind, never tamed, that toroa glide. Soaring above the raging seas of the sub-Antarctic ocean,  making only slight movements at elbow and wrist.

The royal albatross. Returning to us from now on.

Landing on the rocks of Tairoa Heads (off Dunedin), they come here to their only mainland breeding colony, and to some small islands in the deep south.

All things draw the same breathe. I align myself with the bird – open my chest and shoulders, right down to my wing-tips – and draw in life.

In return for their visit to the mainland, something is asked of us.  Since 1937 – when Richdale camped beside the nesting birds – we have guarded their nests both day & night.

It’s our responsibility.  We have to, if they are to visit us on the mainland. Unwittingly, we introduced invasive alien species – ones that would wipe their colony.

It’s a long job.  It takes longer for that one white egg to hatch than any other seabird-egg in the world, and then the chick won’t soar for another eight months.

The first time it flies, it steps off the edge and soars.  The only thing those webbed feet will touch, for the next three years, is sea.

Toroa will be back in the air, back on the west wind, back up in the place of their belonging. 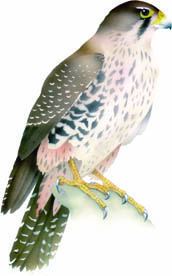 Suddenly, it’s spring!  The wind stirs and birds everywhere are on the wing!  Around the trees; along the beach; up the river.

There was even karearea, our falcon.  Traveling on quick wingbeats, in fast direct flight, swiftly winging its way toward nearby Kapiti Island.

As I stood and watched, amazed to see it, it slowed in flight, and turned for a moment.  Showing me its outstretched wings.

Then it was off again.  Karearea: the high flier.  Fearless.  Swift.  Accurate & deadly.

Our falcons are so fierce, so unafraid, they will even attack kahu, the harrier (itself a hunter and twice their size), by turning over in flight and striking it underneath.

Yet their parenting styles couldn’t be more different!  The fierce falcon is gentle: the bigger harrier is not.

Harrier parents let nature take its course.  As their chicks grow, the older ones elbow the younger ones away from the food.  So the smaller chicks gradually disappear (or get eaten!).

But every falcon chick gets its share.  When they’re small, they’re feed bill-to-bill by their mother.  She tears up the prey brought by their father, and offers pieces to each chick in turn.

Holding out a small piece of liver or breast, her head held so that the chick can easily see the titbit, she waits until the chick has quite finished, before offering the next piece.

In my family fierceness & gentleness were considered opposites.  I needed to toughen up or I wouldn’t survive!

Yet both qualities are within this bird.  Like the spring egg, they contain these opposites.  Ready to be born.

As you enter our bush, it is piwakawaka, the fantail, who comes to greet you. Their chattering voice is an invitation onto Tane’s marae: ti-ti-ti, ti-ti-ti.

Sometimes too, this bird crosses with a message into our waking world.  This has happened to me twice: once in a cave, once in a house.

The first time I was living in Kawhia, on the west coast of the North Island.  I had tucked myself into a sand-cave, under the roots of a giant pohutukawa, and I was crying.

Suddenly, there was piwakawaka, laughing at me!  Dancing in front of my face, it twittered & twisted from side to side.  On and on it chattered, until I got the message, stopped crying, and joined in.

The second time, the bird didn’t laugh – but cried.

I was still on the west coast, but further south (in a place where I’d never seen the bird) when it entered a bedroom. The bird beat itself on the glass, wings spread and fluttering, and cried. I opened every window for it to escape, but it would not.

Then, when I sat and gave thanks for my teacher  – who had just died – it left of its own accord.

The bird had come to honour a man who taught me to look for the Christ light (white/heart energy) within the earth herself.

So why does piwakawaka dance and chatter so?  Because it is one of the forms of Maui, the trickster.

In the story, Mauipotiki (the youngest) was once again left behind by his brothers.  They absolutely refused to take him fishing.

Maui did not like it!  Determined that he would go too, he changed himself into a piwakawaka.  Then he flew out over the ocean, following them.

Arriving at their canoe, he danced in front of their faces.

Then he perched on a seat, and shed his feathers one-by-one, until finally he was Maui.  Still laughing, still chattering.  As it does: ti-ti-ti, ti-ti-ti. 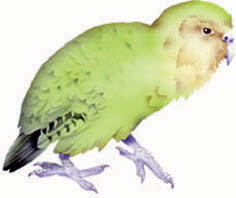 Kakapo ate & ate, grew & grew.  Their soft feathers ripened into a sweet smell, until they became the largest parrot on earth.  Flying was over!  Wings were now to break their fall as they leapt, or for balance as they landed and ran.  So now, walking on stout legs, they made tracks to feeding grounds and bowls.

They were parrots of the night.  Sitting inside a bowl of earth, inflated into a feather balloon, the male sent out a love-call.  Booming down and across the valleys.  Oooom! Oooom! Oooom!

If a female arrived, he began to dance.  Spreading out his wings like a moth, he waved them slowly. Clicking his beak, he swayed from one foot to another.  Approaching her forwards, approaching her backwards.

Playing, delighting, inviting.   A more fun pet than a cat or a dog (so it was said!)

It’s a big job raising kakapo chicks (100+ days).  So as get enough food, she only lays her eggs when the podocarp trees or the tussocks are heavy with fruit.  She has to do it all on her own – he isn’t any help.  He’s too worn out – from that all-night booming!

Because kakapo lived long lives (maybe 100+ years) there were always plenty around. Once when you shook a tree in the daytime, sleepy kakapo rained down on the ground!  That was when their only hunter was hokioi, the giant eagle.

But by 1995 they were called the living dead.  Only 51 birds were left.  And by 1999, they were all gone from the mainland.  Now they only survive, where humans have put them, on 2 predator free islands: Codfish & Anchor.

Our scientists have fought for every last one. Every nest, every egg, every nestling.   Guarding them day and night.

All because now they are hunted by cat, stoat and ferret.  Their eggs are even small enough to be easily opened by kiore.

It’s strange, but big kakapo (male 2.5kg, female 2kg) don’t know how to fight back – unless (of course) it is the males fighting each other! Their camouflage colours don’t hide them, and their sound and strong scent gave them away.

Kakapo lived here for millions of years.  One day – we dream – they will return to the mainland.  That they will be safe here, once more, to eat & eat, grow & grow.

In the game, Cloak of Protection, kakapo is one of the birds you need to make a cloak of forest feathers. But – watch out – hokioi, kiore, ferret, cat and stoat stalk them. 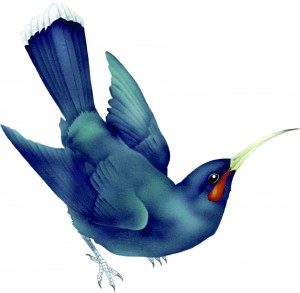 Once the huia lived in our North Island forests.  Last seen in the mid 1920s.  With their two different sized beaks – they were a wonder of the world!  Hers (seen here) was curved, & useful for digging larvae out of logs. His – short and stout – made a great drill.

Humans hunted them for the hat trade and collections, plus they were predated (eaten) by kiore, ship rats, stoats and cats.

Information from the booklet that goes with the game 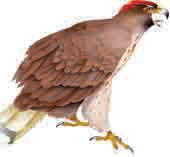